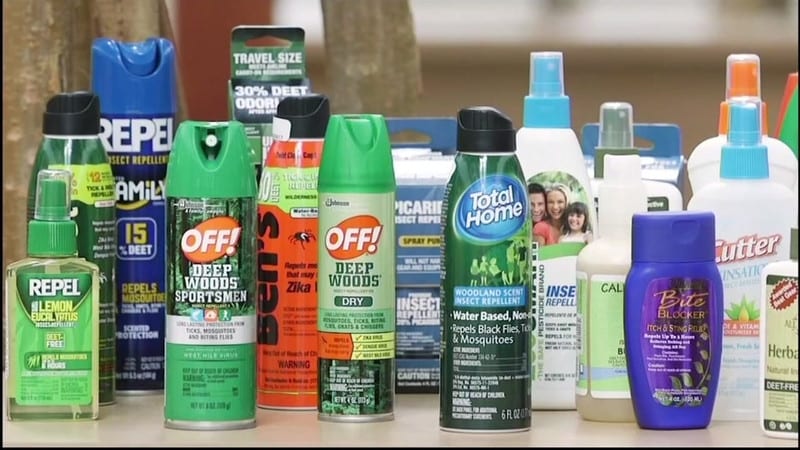 There are three chemicals commonly used in bug spray that are harmful to your health and linked to numerous health issues, DEET, Permethrin and Pyrethoids.

DEET, is one of the most effective bug repellents and also repels ticks BUT is it at a cost?

“DEET has been linked to skin blisters, seizures, memory loss, headaches, stiffness in the joints, shortness of breath, and skin irritation. DEET is also linked to neurotoxicity that may lead to physiological and behavioral problems, especially with motor skills, and learning and memory dysfunction.”

DEET is absorbed through the skin very quickly. One study showed that within 6 hours 48% of “the applied dose” is totally absorbed.

Permethrin is a synthetic pesticide often used in bug sprays.

“It is linked to neurotoxicity, which acts on sodium ion channels, causing repeated nerve impulses. At high levels, it can affect the function of chloride channels, which may result in seizures. One study found that permethrin and DEET, either in combination or alone, were linked to the death of neural cells in various parts of the brain which may lead to many physiological and behavioral issues, including problems with motor skills, learning and memory.”

And lastly, Pyrethoids. They are the most “common chemical class for bug repellant chemicals” and they contain over 1000 insecticides.

“Pyrethroids are lipophilic, which means they love fat cells. They can easily cross the blood-brain-barrier and can thus become toxic to the central nervous system; the WHO has said that synthetic pyrethroids are neuropoisons. Acute reactions to pyrethroids include dermatitis and asthma-like reactions, nausea, incoordination, and burning and itching sensations. The most severe poisoning cases have been reported in infants, because their systems can’t efficiently break down pyrethroids. Many pyrethroids have been linked to endocrine disruption and some have been classified as possible carcinogens.

These toxins add significant stress to your nervous system, left untreated this can lead to other serious health issues.

Chiropractors, through chiropractic adjustments, improve brain and nervous system function so that your body can better adapt to these stressors to help keep you healthy and well.

We will be sharing more information throughout the week about the dangers of bug spray and some healthier alternatives for you to use instead.