Stop Covering Symptoms With Medication. Get To The Root Cause. 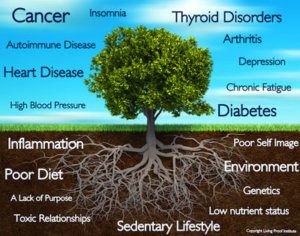 You’ve likely heard some version of this saying: There’s nothing more important than your health. Then why do we take shortcuts when it comes to our health, or ignore it entirely?

I had a 21-year-old patient awhile back who was receiving treatment for about six weeks, and during a reevaluation, she says to me, “My medical doctor put me on depression medication.”

This caught me by surprise, so I said, “I didn’t know you were depressed.” To which she replied, “I’m not.”

Well, now I’ve gone from caught off-guard to thoroughly confused. So, on her next visit I set aside 10 minutes to talk with her. Specifically, why she was on depression medication if she wasn’t depressed.

It turns out, one of the side effects of this particular medication involved lowering the libido. (If you just thought to yourself, aren’t most people trying to raise their libido, you are correct.)

She explained that her 24-year-old boyfriend was rarely “in the mood”, and this was affecting the relationship. Which is why she opted for the medication.

Now, if you haven’t had a TV for the last 10 years, side effects are those long string of fast-spoken words that take up more than half of all drug commercials. They are unwanted. By consumers, and by drug companies. (Which is why the sneaky suckers try to breeze through them.) So, taking a medication specifically for a side effect … a bit unusual to say the least.

Finally, I asked her, “So, you’re willing to sacrifice your health, by taking a likely-dangerous medication to lower your libido, to make up for your boyfriend’s lack of libido.”

Apparently, the realization of how backward this was struck her, and she said, “Well, when you put it that way … ha ha ha.”

Unfortunately, we’ve become a society of convenience. We want it now. And we want it easy. But the easy way rarely works in life, and certainly not when it comes to being healthy.

Nothing worthwhile comes easy. Another saying you’re probably aware of. In this case, the “easy” way of turning to medications is incredibly dangerous. Because in our modern world, when it comes to your health, it’s much easier (See: Deadly) to pop a pill for our problems than get to the root of them.

The problem with those un-magical little pills is that they cover up some pretty big problems. But they’re band-aids. They only hide the problem. And they mask what’s really causing your distress.

If this also seems backward, you are again correct. Because we don’t want to hide from what’s ailing us. We want to find it. We want to fix it. And the only way to do that is to find the root cause.

The point is that hiding from problems never fixes them. It only make them worse. And when it comes to your health – something there’s nothing more important than – it’s irresponsible. And it leads to a day in the future filled with regret.

If you’re experiencing health problems, be sure to find what’s causing it. TRUCHIROPRACTORS can get to the root cause. Call one. You’ll be glad you did.

The nervous system is the most important system in the body because it controls and regulates every system in your body. It does this by allowing your brain to send specific messages to every cell, tissue, organ, muscle and joint in your entire body. When this communication becomes interfered your body will not function as it should and left untreated will lead to symptoms and disease. TRUCHIROs locate and correct these interferences allowing your brain to communicate properly so your body can heal itself without the use of drugs or surgery. For more information about TRUCHIROPRACTIC or where you can find a TRUCHIRO please visit us at www.truchiro.org

Republishing of this content is acceptable as we try to reach as many people as we can with our message. We do ask that you please use all content in it’s entirety including the credit at the end and all reference to www.truchiro.org