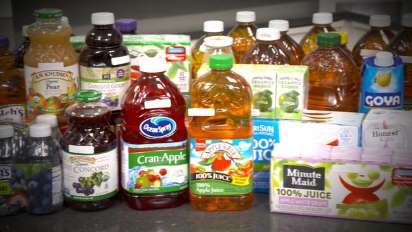 CBS News reports that arsenic, lead and other heavy metals have been found in 45 popular packaged fruit juices.

More than 80% of children 3 years and younger drink fruit juices.

So why are heavy metals being found in fruit juice you may ask?

According to CBS news correspondent Anna Werner, “heavy metals are naturally occurring substances that make their way into our foods through air, water and soil and can also end up in food during the production and packaging processes”.

As a young mother in the early nineties, I remember my pediatrician discussing fruit juice intake with me for my children. In fact daily juice intake was encouraged but it was suggested to not “over due” it because of the sugar it contained and concerns about tooth decay.

The concern was sugar. Not heavy metals.

Lead, mercury, arsenic, and cadmium are the metals most commonly associated with heavy metal poisoning in the United States. These are the 4 metals that were found in the tested fruit juices.

According to the CDC the risk of long term exposure to these heavy metals put people at risk for kidney disease, diabetes, high blood pressure, damaged ability to learn and certain types of cancer.

The levels of the heavy metals found in this study were deemed as “concerning for every day consumption and metals found in 7 of 21 samples were found to “have potential harm for children who drink only half a cup per day”.

Fruit juice offers no nutritional benefit to children under age 1 and should not be included in their diet, according to a new policy statement issued by the American Academy of Pediatrics that marks the Academy’s first change in recommendations on fruit juice since 2001.

Consumer reports says “Parents should be concerned but don’t panic”…ya right! They go on to say, the concern is long term exposure. Well what about those parents whose kids are older and didn’t have this information when they were growing up?

Toxins are everywhere. As TRUCHIROPRACTORS part of our job is to educate the public about reducing exposure to the 3 T’s that cause nerve interference in the spine, which, if left untreated manifests into illness and disease.

Trauma, thoughts and Toxins. They all lead to nerve interference.

More and more toxicity in everyday products and foods we consume is being exposed on a daily basis.

Opt for water instead of juice.

To make the transition smoother for your little one mix half water and half juice and then keep diluting it more and more for a couple of weeks until he/she is only drinking water.

A TRUCHIRO will ensure your kiddos nervous system is functioning at its optimal level by removing nerve interference. With daily exposure to the 3 T’s, getting adjusted is crucial to maintaining true health.

The nervous system is the most important system in the body because it controls and regulates every system in your body. It does this by allowing your brain to send specific messages to every cell, tissue, organ, muscle and joint in your entire body. When this communication becomes interfered your body will not function as it should and left untreated will lead to symptoms and disease. TRUCHIROs locate and correct these interferences allowing your brain to communicate properly so your body can heal itself without the use of drugs or surgery. For more information about TRUCHIROPRACTIC or where you can find a TRUCHIRO please visit us at www.truchiro.orgRepublishing of this content is acceptable as we try to reach as many people as we can with our message. We do ask that you please use all content in it’s entirety including the credit at the end and all reference to www.truchiro.org